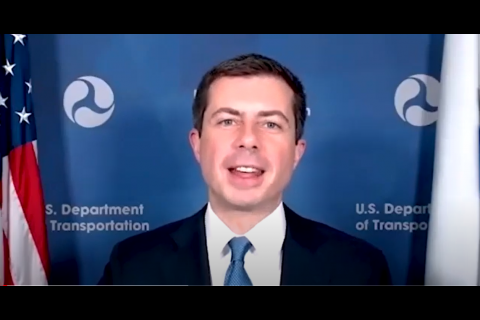 Representing some of the very best highway safety practices, the seven winners were selected from a nationwide field of applicants for the awards, which are sponsored jointly by FHWA and RSF. Begun in 1999, the biennial program honors projects and programs that cost-effectively help the nation achieve progress toward eliminating highway fatalities and serious injuries.

“Congratulations to today’s seven honorees for the remarkable work they’ve done to protect the traveling public,” said Buttigieg. “They are proof that we have no shortage of willpower or good ideas for improving roadway safety.”

Preliminary data from the National Highway Traffic Safety Administration show that 38,680 people died in motor vehicle traffic crashes in 2020 – a 7.2 percent increase from 2019. This increase occurred despite a 13.2 percent decrease in vehicle miles traveled due to the pandemic and is the highest number of fatalities since 2007.

“Projects like these save lives by significantly discouraging dangerous driving,” said Greg Cohen, Executive Director of the Roadway Safety Foundation. “Countless future travelers, whose lives and limbs will be spared by these innovations, will owe an unknowing debt of gratitude to today’s honorees. We urge DOTs across the nation to look at Bellevue and other awardees’ innovations and replicate them wherever possible”

Applicants were encouraged to nominate projects and programs that are innovative, effective and cost efficient. The awards covered two categories: A) Infrastructure and Operational Improvements, and B) Program Planning, Development and Evaluation.

From dozens of entries, a highly credentialed, expert panel of judges selected the seven winners and three honorable mentions. They winners are:

The honorable mentions are: The Florida Department of Transportation for its Local Technical Assistance Program to improve the skills and increase the knowledge of the transportation workforce on roadway safety via virtual training and technical assistance; the Montana Department of Transportation for its reconstruction of an antiquated segment of U.S. Highway 89 that provides a key entrance to Glacier National Park; and the Town of Portland, Ct. for its formation of a grassroots Complete Streets Group to coordinate with local officials in writing, adopting, and implementing a Complete Streets Policy.

Winners were selected by an expert panel of judges from a variety of disciplines. For complete details on each of the winners, and for more information on the national awards program, visit roadwaysafety.org/awards.

The Roadway Safety Foundation is a 501(c) (3) charitable and educational organization. Our mission is to reduce the frequency and severity of motor vehicle crashes, injuries, and fatalities through improvements to roadway systems and their environment.